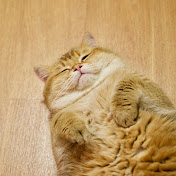 I’m Hosico! Fluffy cheeks and sweetie-pie! ‘Hosico’ translated from Japanese means ‘star child’. Born on August 4, 2014 in Russia. Hosico loves to play only with the new toys, in a week he would get bored of them. He prefers shoelaces, sheet of paper or tennis ball, none of those regular toys we’ve got for him from the pet shop. Hosico is scared of new people and places. Even if he finds some old stuff on another place, he would be surprised and frustrated. Everything that is displaced , might be dangerous! Hosico is often compared with Puss in Boots from the ‘Shrek’ cartoon, or with Garfield, or even with a squirrel and a big hamster. Hosico is a representative of the breed Scottish Straight.

Today is master-class: how to paint a cat